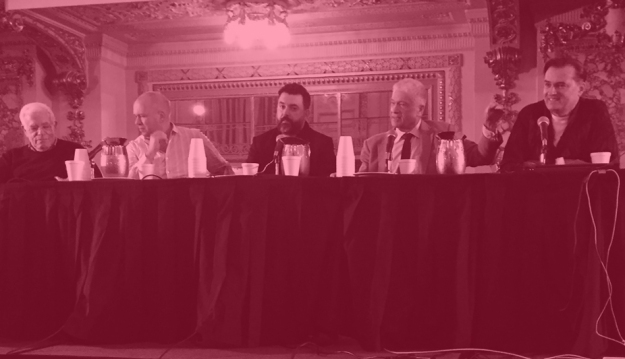 Dominated by old boys, architecture academia in the US has become insular and out of touch, says Reinier de Graaf

What follows is a lengthy exposé about what, according to the person asking the question, is a highly contextual piece of architecture. Speaking is Jeffrey Kipnis, theorist, designer, filmmaker, curator, educator, founding director of the Architectural Association’s Graduate Design Program and professor at Knowlton School of Architecture, Ohio State University.

The exchange (if one can call it that) takes place during one of the parallel sessions at the biennial. Apart from Kipnis, the session includes Patrik Schumacher, design director at Zaha Hadid Architects; Peter Eisenman, principal of Eisenman Architects and a pivotal figure in American academia (present and past positions too many to list); Theodore Spyropoulos, founder of architecture studio Minimaforms; and me, a partner at the Office for Metropolitan Architecture. The panel has been assembled to express its views on a potential agenda for 21st-century architecture.

The composition of the panel seems odd: most of the panelists’ formative lives have been lived in the 20th century, and all the panelists are from a part of the world to which – unless all current indicators are completely misgiven – the 21st century will not belong.

The venue is The Gold Room in the Congress Plaza Hotel. Tickets have sold at $50 and, while that ticket price suggests the event is in high demand, the room is only half full, making its grandeur perfectly inappropriate for the occasion. One of African architecture’s rising stars speaking at a venue next door appears to have drawn a larger crowd. Still, the modest turnout hardly fazes the panelists. The epicenter of American academia thrives even in the absence of an audience.

Schumacher’s opening salvo is a proclamation of the end of pluralism (delivered with an impeccable German accent) and of the imminent global dominance of a single remaining master-style – his own. Eisenman, who is next, suggests a change of format: “Only Patrik should present, while the rest of us put up a collective resistance.” His request is denied and Eisenman has to content himself with “agreeing to disagree”. His presentation calls for “heroes instead of stars in architecture”. Not something anyone could agree to disagree with, although Spyropoulos tries. But here, in the context of an all-male, all-white stage, his call leaves a somewhat dubious taste.

After Eisenman, it is open season, not just for each of the panelists’ individual obsessions (in order of appearance: parametricism, Alberti, Gehry, Piketty and robots), but also for the audience. Someone, who introduces himself as humble teacher at a humble university, asks why there are no women on the stage. With almost Trumpian bravado, Kipnis replies that he LOVES women, but is dumbfounded by the stupidity of such a question, which he then views as a logical explanation for the career progress (or lack thereof) of the questioner. In an attempt to rescue the situation, Eisenman murmurs that women have become so popular these days that they have become unaffordable. We simply have to assume he means as panelists.

It is Kipnis’ turn. His idea of offering the audience value for money is to subject it to a kind of intellectual waterboarding. His positions are invariably introduced via the same discursive formula: “Did you know…? You did not…? You should! Since you don’t, let me tell you…” It is unclear to what extent – if at all – he is seeking a discussion. Kipnis tempts the audience with long pauses, invariably followed by “let me finish!” when someone interjects.

The main topic of his presentation is the Guggenheim Helsinki museum competition, a competition that to this day has not produced a realised building and doesn’t look like it’s going to any time soon.

He presents the many entries to the competition as a repository of contemporary design intelligence, showing a meticulously categorised inventory of apparently simultaneously emerging families of design solutions to particular problems. Akin to the prolific genres in contemporary music, certain “design waves” are identified and tagged with a name. Any link to the individual authors is discarded. Trends take priority over signatures. Originality is no longer a paradigmatic feature. The myth of individual genius is dismantled in favor of architects as a virtual, yet largely unaware collective.

His argument takes a bizarre turn when he digresses into a strange and unexpected endorsement of Frank Gehry, who in many ways personifies the exact opposite. Unlike the struggling souls of the Helsinki competition, Gehry is the ultimate signature architect. His approach to architecture is his and his alone, it permits no following other than through imitation. In bringing up Gehry, Kipnis turns his own suggestion of architecture as a form of collective progress into scorched earth even before it has landed.

Kipnis seems blissfully unaware of the contradiction. He proceeds to explain Gehry’s design intentions as if he were the oracle of Zeus. The silence that ensues at his question about the contextual nature of the Pritzker Pavilion is not so much a sign of the audience’s ignorance as it is of its bewilderment. Don’t all Gehry’s buildings look the same?

It is clear to everyone in the room (at least to those who have built a building) that whatever the magnitude of the intentions that go into a design, it must ultimately subside to the prevailing perception – however unfair – of its physical presence, at which point the only correct answer to Kipnis’ question is that it is irrelevant. If legacy is ultimately a question of numbers, what constitutes the more significant intellectual fact: one person’s supposed insight into Frank Gehry’s design intentions, or the vast majority’s willful ignorance of them? Who holds the key, Kipnis or the Simpsons?

As the evening progresses, the event turns into a painful X-ray of the current state of American academia: a strangely insular world with its own autonomous codes, dominated by some antiquated pecking order with an estranged value system and no hope of a correction from within. The often grandiose character of the debate stands in stark contrast to the marginal nature of that which is being debated.

The western architectural ivory tower has become a theatre of the absurd, blind to its decline into irrelevance. Self-referencing and obsessed by minutiae unrelated to the built environment, our academics need to break out of their closed information loop and get back into the real world.

Kipnis’ definition of context doesn’t go beyond the immediate physical surroundings of the architectural object. Any notion that architecture might be shaped by a larger political, societal or economic context does not seem to register on his radar. It is as though America’s architectural establishment is preoccupied with studying footnotes under a microscope hoping they will turn into a novel.

Those who attend the dinner afterwards are cautious with their alcohol intake. Even with the debate officially concluded, one has to remain alert. Dinners serve as extra time for the settling of undecided intellectual battles – a last chance to turn defeat into victory. When all other subjects appear to have been exhausted, for some unidentifiable reason the table conversation turns to the brain and the question whether it ought to be discussed as an organ or as a muscle.

Just when the vision of a brain without a skull is about to make me lose my appetite, Kipnis turns to a young woman at the table. He asks her to guess his favorite organ. When she looks at him in shock – she must be less than half his age – he smiles: “Rest assured, my favorite organ is my mouth.” Eisenman points out that the mouth is in fact not an organ. For the first time that evening, Kipnis looks genuinely unsettled, prompting Eisenman to ask the question of the day: “Jeff, have you been drinking?”