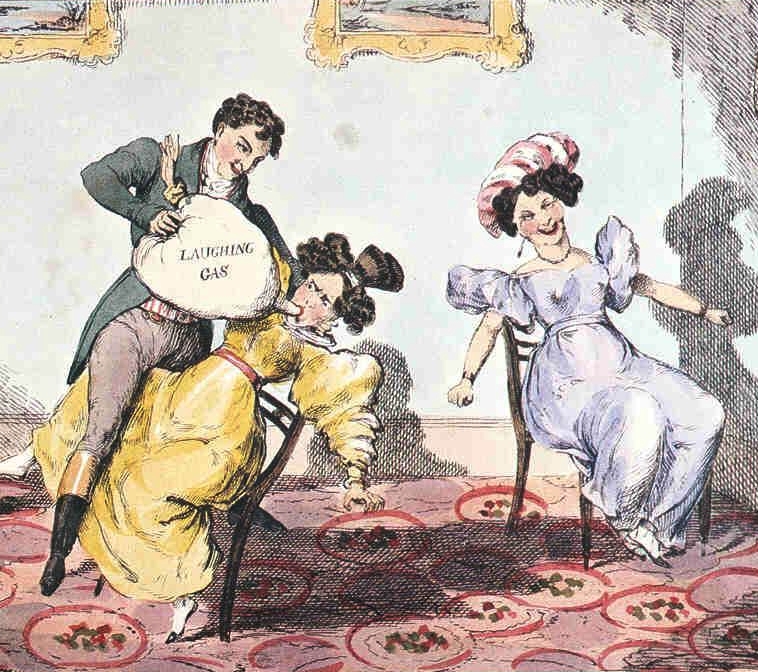 Detail from a satirical print from 1830 depicting Humphry Davy administering a dose of Laughing Gas to a woman while Count Rumford looks on (cropped out of the picture above), above the caption “Prescription for Scolding Wives”

On Boxing Day of 1799 the twenty-year-old chemist Humphry Davy – later to become Sir Humphry, inventor of the miners’ lamp, President of the Royal Society and domineering genius of British science – stripped to the waist, placed a thermometer under his armpit and stepped into a sealed box specially designed by the engineer James Watt for the inhalation of gases, into which he requested the physician Dr. Robert Kinglake to release twenty quarts of nitrous oxide every five minutes for as long as he could retain consciousness.

The experiment was taking place in the lamp-lit laboratory of the Pneumatic Institution, an ambitious and controversial medical project where the young Davy had been taken on as laboratory assistant.

While seated in the box breathing deeply, Davy had felt the effects that had become familiar from his many previous experiments since he had first inhaled the gas earlier that year. The first signature was its curiously benign sweet taste, followed by a gentle pressure in the head as he continued to inhale. Within thirty seconds the sensation of soft, probing pressure had extended to his chest, and the tips of his fingers and toes. This was accompanied by a vibrant burst of pleasure, and a gradual change in the world around him. Objects became brighter and clearer, and the space in the cramped box seemed to expand and take on unfamiliar dimensions.

Now, under the influence of the largest dose of nitrous oxide anyone had ever taken, these effects were intensified to levels he could not have imagined. His hearing became fantastically acute, allowing him to distinguish every sound in the room and seemingly from far beyond: a vast and distant hum, perhaps the vibration of the universe itself. In his field of vision, the objects around him were teasing themselves apart into shining packets of light and energy. He was rising effortlessly into new worlds whose existence he had never suspected. Somehow, the whole experience was irresistibly funny: he had ‘a great disposition to laugh’, as all his senses competed to exercise their new-found freedom to its limit.

Now the gas took Davy to a dimension he had not previously visited. Objects became dazzling in their intensity, sounds were amplified into a cacophony that echoed through infinite space, the thrillings in his limbs seemed to effervesce and overflow; and then, suddenly, he ‘lost all connection with external things’, and entered a self-enveloping realm of the senses. Words, images and ideas jumbled together ‘in such a manner, as to produce perceptions totally novel’: he was no longer in the laboratory, but ‘in a world of newly connected and modified ideas’, where he could theorise without limits and make new discoveries at will.

After an eternity he was brought back to earth by the sensation of Dr. Kinglake removing the breathing-tube from his mouth; the outside world seeped back into his ‘semi-delirious trance’ and, as the energy returned to his limbs, he began to pace around the room. Yet a part of him was still present in the dimension of mind that had swallowed him whole, and he struggled for the words to capture it. He ‘stalked majestically’ towards Kinglake ‘with the most intense and prophetic manner’, and attempted to shape the insight that had possessed him. ‘Nothing exists but thoughts!’, he blurted. ‘The world is composed of impressions, ideas, pleasures and pains!’

Davy’s Boxing Day experiment was the culmination of a freewheeling programme of consciousness expansion into which he had co-opted some of the most remarkable figures of his day. Within days of his first self-experiment in April he had offered the gas to his friend Robert Southey, the future Poet Laureate, whose reaction was as effusive as Davy’s own: ‘the atmosphere of the highest of all possible heavens must be composed of this gas’. Southey’s ecstatic report to his brother Tom set the tone for the explorations that were to follow:

O, Tom! Such a gas has Davy discovered, the gasoeus oxyd! O, Tom! I have had some; it made me laugh and tingle in every toe and finger-tip. Davy has actually invented a new pleasure for which language has no name. O, Tom! I am going for more this evening; it makes one strong and so happy, so gloriously happy! O, excellent air-bag!

In the early summer of 1799 the nitrous oxide trials began in earnest. In the evenings, after the Pneumatic Institution had closed, the nitrate of ammoniac reaction would begin to bubble in its upstairs drawing room as Davy and Beddoes’ circle – doctors and patients, chemists, playwrights, surgeons and poets – experimented on themselves and each other. Davy was master of ceremonies and also, by his own account, inhaling the gas himself three or four times a day. The laboratory became a philosophical theatre in which the boundaries between experimenter and subject, spectator and performer were blurred to fascinating effect, and the experiment took on a life of its own.

Although the trials commenced within a medical framework, they came to focus increasingly on questions of metaphysics and, in particular, language. Davy was struck by the poverty of the ‘language of feeling’ available to his subjects, and the awkwardness of their attempts to put their experiences into words. The standard medical question ‘how do you feel?’ took on imponderable, existential dimensions. The subjects were not mentally impaired by the gas, but overstimulated beyond the reach of words themselves: as Davy himself put it, ‘I have sometimes experienced from nitrous oxide, sensations similar to no others, and they have consequently been indescribable’. James Thompson, one of the volunteers, captured the magnitude of the task precisely: ‘We must either invent new terms to express these new and peculiar sensations, or attach new ideas to old ones, before we can communicate intelligibly with each other on the operation of this extraordinary gas.’

Davy instituted a loose reporting protocol, asking every volunteer to produce a short written description of their experience. Some subjects produced answers that were oblique but highly imaginative: one of the clinic patients answered ‘how do you feel?’ with ‘I feel like the sound of a harp’. Musical analogies emerged repeatedly, attempting to catch the aural effect of ringing harmonics that often accompanies the rush of nitrous oxide intoxication. Beddoes, emerging from a deep immersion, once shouted out the single word ‘Tones!’. This resonated with images that were emerging in the poetic writings of Southey and his friend Coleridge: the Aeolian wind-harp, for example, which draws its harmonies directly from Nature herself.

Davy also took enthusiastically to experimenting on his own. On full moon nights in particular, he would wander down the Avon Gorge with a bulging green silk air-bag and notebook, inhaling the gas under the stars and scribbling snatches of poetry and philosophical insight. One one occasion he made himself conspicuous by passing out and, on recovery, was obliged to ‘make a bystander acquainted with the pleasure I experienced by laughing and stomping’. He noted an element of compulsion in his use, confessing that ‘the desire to breathe the gas is awakened in me by the sight of a person breathing, or even by that of an air-bag or air-holder’. He began to push his experiments into more dangerous territory. He tried the gas in combination with different stimulants, drinking a bottle of wine methodically in eight minutes flat and then inhaling so much gas he passed out for two hours. He also experimented with nitric oxide, which turned to nitric acid in his mouth, burning his tongue and palate, and with ‘hydrocarbonate’ – hydrogen and carbon dioxide – which left him comatose, the air-bag fortunately falling from his lips. On recovering, he ‘faintly articulated: ‘I do not think I shall die’’.

By the end of the summer, the energy of the trials was dissipating: for most of the volunteers, the novelty of the experience wore off after a few sessions. Davy’s experiments became increasingly solitary, partially focused on resolving technical questions such as how much gas was absorbed into the bloodstream and whether it should be classified as a stimulant or a sedative, but also searching for a framework – scientific, poetic or philosophical – to account for its effects. In this he was assisted by the arrival of Samuel Taylor Coleridge, who returned to Bristol in October from an extended visit to Germany.

Coleridge and Davy’s friendship would evolve and endure through the many phases of their future careers; but it began with a green silk bag of nitrous oxide. As Coleridge inhaled and felt its warmth diffusing through his body, he did not reach for extravagant metaphors but stated precisely that the sensation resembled ‘that which I remember once to have experienced after returning from the snow into a warm room’. In a subsequent trial he ‘was more violently acted upon’ and confessed that ‘towards the last I could not avoid, nor felt any wish to avoid, beating the ground with my feet; and after the mouthpiece was removed, I remained for a few seconds motionless, in great ecstacy.’

Coleridge was captivated by the young chemist: ‘Every subject in Davy’s mind’, he wrote, ‘has the principle of vitality. Living thoughts spring up like turf under his feet.’. Davy was equally swept up in his new friend’s expansive vision, which he felt had the power to transform science as well as poetry. Coleridge had returned from Germany in thrall to the new idealistic turn in its philosophy: the theories of Immanuel Kant and the emerging ‘Naturphilosophie’, according to which the human mind was the ultimate source of our reality, and the material world only an illusion projected by it. The dissociative effects of nitrous oxide, in which consciousness seemed to escape and transcend the physical body, made compelling sense of this insight; and Davy’s climactic revelation that ‘nothing exists but thoughts’ would echo it through the century to come.

Despite their chaotic melange of hedonism, heroism, poetry and philosophy, Davy’s report on the trials, when it emerged, made a coherent and powerful case for their scientific worth. After his climactic Boxing Day experiment, he began writing at top speed and by Easter of 1800 had produced a 580-page monograph on the new gas and its effects. Under the businesslike title Researches, Chemical and Philosophical; chiefly concerning Nitrous Oxide, or dephlogisticated nitrous air, and its Respiration, he described the synthesis of the gas, its effect on animals and animal tissue and, in an unprecedented final section, the descriptions of the subjective effects of nitrous oxide intoxication on himself and two dozen further subjects, including Beddoes, Coleridge and Southey.

Davy’s report combined two mutually unintelligible languages – organic chemistry and subjective experience – to create a groundbreaking hybrid, a poetic science that could encompass both the chemical causes of the experience and its philosophical consequences. By the end of 1800 his reputation had spread through Britain’s scientific community and beyond, and he was already preparing to leave Bristol for a post at the Royal Institution, at the centre of the London network of power and privilege through which he rose to prominence with breathtaking speed. His dazzling lectures there would make him the public face of science for the coming generation, and the nitrous oxide experiments would become an emblem of the heroic commitment to discovery that it would demand of its practitioners in the new century.